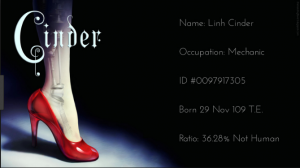 “Humans and androids crowd the raucous streets of New Beijing. A deadly plague ravages the population. From space, a ruthless lunar people watch, waiting to make their move. No one knows that Earth’s fate hinges on one girl. . . .

Cinder, a gifted mechanic, is a cyborg. She’s a second-class citizen with a mysterious past, reviled by her stepmother and blamed for her stepsister’s illness. But when her life becomes intertwined with the handsome Prince Kai’s, she suddenly finds herself at the center of an intergalactic struggle, and a forbidden attraction. Caught between duty and freedom, loyalty and betrayal, she must uncover secrets about her past in order to protect her world’s future.”

Okay so I heard about this book and I figured it was just a Cinderella retelling, boring stuff, who cares. But then I got it from the library and I saw the cover. LOOK AT IT. LOOK AT THAT CRAZINESS. WHY IS THERE A ROBOT FOOT. I had to know. And the book starts with Cinder actually removing her robot foot and replacing it. Which is SO COOL! I loved it from the first line.

This IS a Cinderella retelling, sort of, but nothing like I’ve ever seen before. It’s set in Beijing, China 200 years in the future. Everybody has ID chips and hovercars. Cinder is a cyborg and her best friend is an android. Snow White’s Evil Queen is there, but she’s the Queen of the motherfuckin’ Moon and her thing is brainwashing people into thinking she’s super beautiful. Rapunzel is there, but her name is Cress and she’s a computer hacker. I think Red Riding Hood is going to make an appearance.

And Prince Charming is…REALLY fucking charming. His name is Kai and I love him. He’s sweet and adorable and incredibly suave and he’s my precious lil cinnamon roll and I need him to be happy forever please and thank you.

The book starts without a whole lot of conflict – Cinder is a mechanic, and the prince visits her stall in the market to see if she can fix a robot. Pretty cool, but kind of tame. But then there’s an outbreak of leutimosis (I am definitely spelling that wrong) in the market, and after Cinder goes home that night, her stepsister (the one she actually likes) catches it too. Her stepmother blames her and volunteers her for leutimosis testing in the palace science lab. Things kind of snowball from there and Cinder gets caught up in a Lunar plot against the Commonwealth and she and Kai flirt really hard and then shit goes south and then it goes south again, and then there’s a sequel and it ended on a cliffhanger and I’m very upset.

And somehow, inexplicably, I was completely hooked from the first page and couldn’t put it down. I have no idea how she did that but I’m annoyed and jealous and amazed at the same time. And I went and got Scarlet pretty much immediately so we’ll see how that goes.